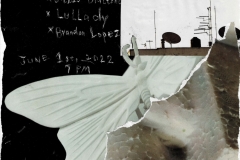 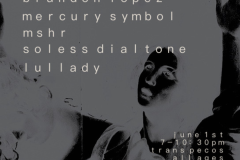 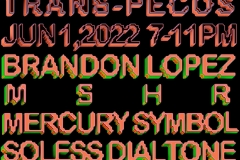 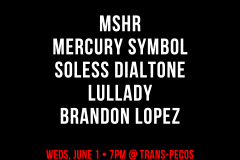 <TICKETS HERE> !!! 7pm doors, 8pm live sounds start // fb event // head’s up: MSHR has a STROBE-Y SITUATION!!! i’ll remind you at the show tho!! also rates are ridic, trans-pecos has a GIGANTIC backyard, & the weather should be gorgeous; please wear a mask indoors (i’ll bring extras!) & have your drink outside!

Soless Dialtone (@soleless_dialtone) is the project of multi-disciplinary sound artist, composer, and improviser Kwami Winfield. Her compositions for dance film Stellar and her modeling on rooftops in Queens have been called “dreamy” by The New York Times and NYC Noise, respectively. Her recent collaborators include C. Spencer Yeh, with whom she has performed at the venerable Chaos Computer, and Sam Hafferty, with whom she recorded a track for the STUFF I LIKE VOL.3 comp (thanks for that intro SH!). Winfield makes compelling choices and can be found on the internets playing at least half a dozen instruments and sharing her process generously.

MSHR (@nestedface & @liquidtransmitter) is an art collective that builds and explores sculptural electronic systems. Their practice is a self-transforming entity with its outputs patched into its inputs, expressing its form through interactive installations, virtual environments and live improvisations. MSHR was established in 2011 in Portland, Oregon by Brenna Murphy and Birch Cooper. Their name is a modular acronym, designed to hold varied ideas over time. // www.MSHR.info 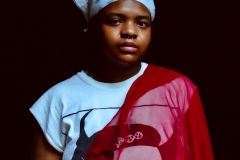 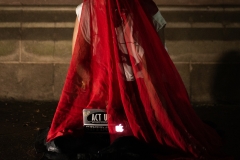 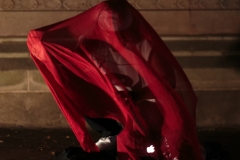 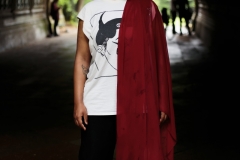 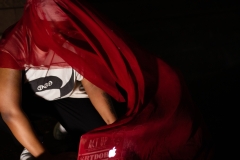 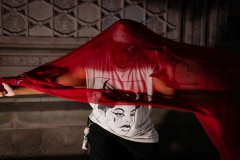 Mercury Symbol (@mercurysymbol) is the Bronx-based harsh noise wall/sound collage project of Adonis S. He is also a poet, artist, and educator who has recently performed at Chaos Computer, Blank Bamboo, Market Hotel, and Ende Tymes 12.

Lullady (LeLe Dai; rarely @guppydaughter) was born in Hangzhou, China and currently resides in New York City with two cats. She also had an eight-year layover in Sydney, Australia, where she studied Mathematics and Finance. She is now doing an MFA at Hunter College. LeLe’s performance oriented work encompasses visual and sonic elements and often intervenes public spaces and look for participation from spectators. The potential to create an alternative utopian zone from society’s garbage requires ecological and alchemical transformation, which derives from continuous negation leading to unpredictable texture. Her work has been exhibited at galleries, universities, theaters and various venues.  LeLe sometimes plays secret shows at public spaces in New York City. // http://lullady.com

Brandon Lopez is a musician based in NYC; he is of Puerto Rican descent. His music has been described as “brutal” and “relentless” by publications of note like the New York Times. He was once a soloist with the New York Philharmonic; he was the artist in residence at a few wonderful NY venues; and he frequently travels abroad performing his own music with others. He is part of a critically acclaimed trio with Fred Moten and Gerald Cleaver. There’s a whole mess of other shit to learn and listen, but you do the fucking work. // http://brandonlopez.nyc